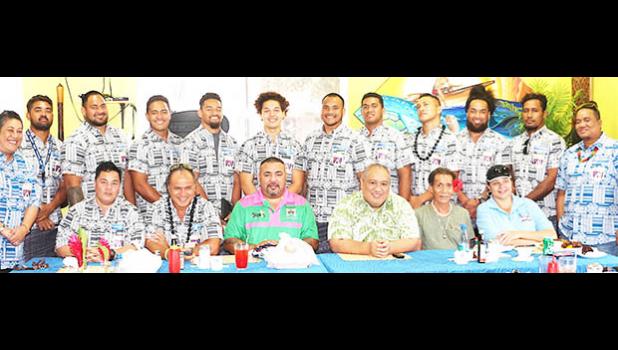 Present at the luncheon was (front center) Taupau Tauileave Toluono of Pentagon Samoa and it’s family of companies, which was the major sponsor for the team, providing all the uniforms, return accommodations and coverage of the Oceania Sevens through Samoa News and its social sites.

Ms. Leilua Stevenson (far right seated), who with Saline Faumuina of DDW sponsored the farewell dinner, the return layover in Apia dinner and helped while the team was in training camp was also on hand at the luncheon. ASRU Chairman Iiga Peseta Sa Mavaega (seated right of Taupau), on behalf of the ASRU, Acting President, Vice President and Secretary Falefata Moli Lemana, Board member Uini Tanuvasa, National Team Coach Tommy Elisara and Talavalu Team Manager Annyliese Coffin thanked the Talavalu players for representing American Samoa well at the Sevens given the limited time they were able to train together.

Special recognition and appreciation was also conveyed to the players that travelled from the US to join the squad when contacted for help in fielding the team as one of the requirements of the Oceania Sevens Championships is that all countries must field athletes who hold passports issued by the country for which they are playing.

ASRU and Talavalu presented Taupau and Stevenson with tokens of appreciation by for the love and support throughout the Talavalu’s preparations for the Sevens, as well as during the championships. More photos and story will be in the Wednesday edition of the Samoa News.