Will we see the battle of the Samoan QBs? 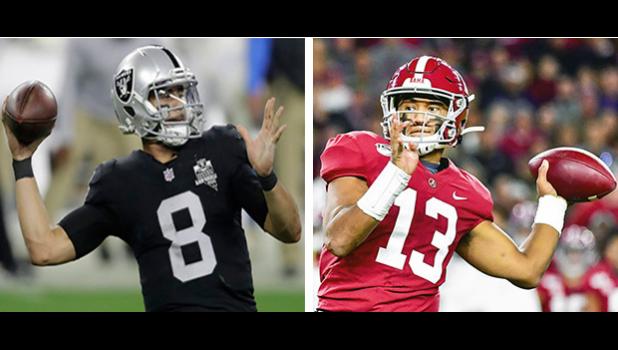 Miami, FLORIDA — Long before they took the college football world by storm and their NFL careers began, Tua Tagovailoa will never forget when he first met fellow Hawaiian and Samoan quarterback Marcus Mariota.

It was during a football camp at St. Louis School in Honolulu, which became the high school alma mater for both players.

Some of the older participants at the camp wondered why Tagovailoa, who was just a fourth grader at the time, was throwing alongside them.

And that set off a friendship that has lasted ever since, and could be the focus of Saturday night’s game between the Miami Dolphins and Las Vegas Raiders.

“At the time, Marcus was really big in the college football realm. He was at Oregon. He was a big role model for a lot of us kids back home, but I think fourth grade when I first met him at a football camp, man, [he was] just a humble guy, a hard worker,” Tagovailoa said of Mariota this week.

“I went and threw with the high schoolers at fourth grade. Everyone was wondering, ‘Why are you throwing with us, you’re a fourth grader.’ Marcus kind of took me under his wing, so to say. I guess from there, I just really looked up to him and he’s just really been the same person.”

Now, Tagovailoa and Mariota will be on opposing sidelines for the first time since becoming friends.

Tagovailoa, the Dolphins’ new franchise quarterback, will be making his eighth career start.

Mariota, now a backup for his second NFL team, may or may not start depending on the health status of Raiders starter Derek Carr, who despite a groin injury became a full participant in practice on Wednesday.

If Mariota plays in any capacity against Tagovailoa, it would be the first matchup between quarterbacks from Hawaii in NFL history.

And it could be a game that transcends Samoan and Polynesian culture in the process.

“I think that’s something super cool to see for the kids back home in Hawaii, to see two guys compete against one another, if Marcus is named the starter,” said Tagovailoa, whose parents Galu and Diane are Samoan, while Mariota’s father is, too.

“If Marcus does get that opportunity, I think it’ll be really fun.”